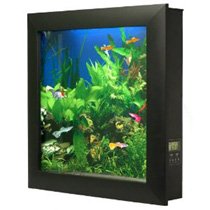 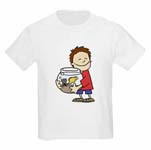 Although they are one of the most pleasant looking goldfish they are unfortunately not that hardy and require more care than a common goldfish. Because of their long finnage they do require a lot of space to swim freely without their fins catching on anything, also mind to keep the aquarium not too packed out with plants, stones and rocks etc as the fins are easily damaged.

The quality of water a Veiltail is kept in must be maintained otherwise the fish can easily Lose its colour, their fins are susceptible to rot and many other fungal diseases.

The colours a Veiltail is available in varies much, they can range from orange and red metallic to black to nacreous. It is thought that the rounder the body, the better specimen of fish it is.

A typical Veiltail will live between four and six years and can grow to around 3-5 inches in length without including the tail. This fish prefers temperatures a little warmer than other fish we have mentioned on this site, the water should not be allowed to drop below 50F, an ideal temperature range is between 64F-74F.

The Veiltail should only be kept with other Veiltails in the tank, they are not very competitive or hardy so should not be kept in an outdoor pond. Continue reading about other