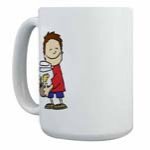 The Ranchu is the simplest of all the Lionhead type varieties of goldfish. It is round like an egg shape and lacks a dorsal fin. The Japanese name the fish the Maruko which translates to round fish, they do use the name to describe other fish of similar shape but it is most commonly used to identify this breed.

The Ranchus back has an arch all the way to its caudal peduncle which points in a downward direction. This downward arch results in the Ranchus tail also pointing downward at an approximate 45-degree angle. Their fins are relatively short and they boast a dual caudal fin (tail fin).

The most prominent feature of the Ranchu is their head, which is covered with a hood or cap, many fish experts can best describe this feature to look like a bumpy extra flesh that is similar to a raspberry texture, this gives the Ranchu and its many relations notoriety.

The cap on a Ranchu does not begin to show until its second year of life and can continue to grow into their third year. It is important to ensure the water in the tank that a Ranchu is kept in is very well aerated, as the cap has been known to interfere with their breathing.

The Japanese consider there to be three types of growth around the head area. They have the tokin that describes a growth just above the head that resembles a cap. The okame is used to describe having growth on either side of the head with no growth on top, this looks like swollen of stuffed cheeks. Finally they have shishigashira, a word used to describe the full hood covering the top and sides of the head.

The Ranchu can come in nacreous and metallic forms; they are commonly seen in many combinations of red, yellow, orange, black, blue, silver, violet and white. It is thought that the more blue or black the fish is the more it is worth in the marketplace.

The Ranchu usually lives between five and ten years and they like a constant temperature of around 54F  64F. They can grow up to around 3 inches in length without including the tail. These fish are prone to fungal infection around their cap area hence a more experienced fish keeper is required to tend to these fish. Continue reading about other 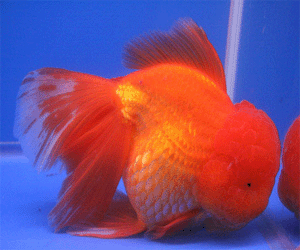